What laser tubes are we now using on Thunder

The 3 Thunder lasers had the tubes replaced with those from a different manufacturer. Thank you team for doing this. They cut so much better - at the level we were originally promised.

Question- what are the new tubes? Who is the vendor? I ask both for future reference and for public benefit. The Lab MakerSpace is looking to replace the tube on their Thunder clone.

We paid $850 each for 2 tubes last august. One of the lasers (I believe blitzen, but I’m not sure) is still running the old SPT tube.

Major brands at our power level are SPT, GSI, and RECI. I was advised against RECI due to issues with their output mirrors sealing to the tube. We had issues with the output mirror cooling fitting springing leaks in our SPT tubes (the oe manufacturer for thunder as well). So, we’re on the GSI tubes. I’m impressed so far, they don’t have the output mirror cooler so they can’t spring a leak, and I like their electrical connection much more than the SPT tubes (a screw and a ring terminal instead of flying leads that can break).

This is what we bought and who we bought it from. At this point I would recommend them. However, remember that we have the special Nova 35’s with the extended tube housing, I don’t believe a standard nova 35 will fit a 130w tube. 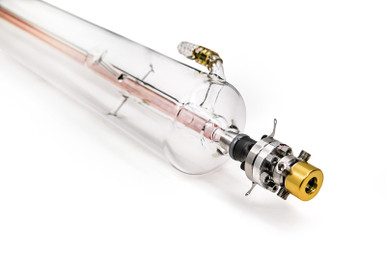 @trapezium I’d recommend picking up a spare if we haven’t already since we don’t have any at the moment.

sorry to bump the thread, just wanted to let you know we worked out a 5% off discount code (THUNDER) with lightobject and we have more tube info here:

NOTE: THE NOVA 35-80 NOW SHIPS WITH A 90W RECI W2 TUBE. CONTACT [email protected] FOR MORE INFO IF YOU HAVE AND ORIGINAL RECI TUBE. LightObject also sells Reci W2 tubes. If your Thunder Laser is under warranty, you need to use our...