Hello!
I recently came into a 1924 singer Treadle sewing machine.
I wanted to see if I could improve the speed/efficiency of the treadle, and address an annoying design flaw.
. image1810×1834 1.28 MB
Design flaw- because it’s a treadle>pitman arm>crank shaft setup, the machine can begin motion in either direction. But only one direction is useful, counter-clockwise breaks needles and ties knots in the gears.
Improvements already made
I’ve moved from a 1/4" round leather belt which has a tendency to stretch and slip to a 1/4" rough textured polyurethane belt. It has helped power transmission and eliminated slipping.

Improvements I am considering:
My back-of-the envelope math says that the rotational inertia (hub/spokes/rim calculated individually and added together)
Says that a 4lb, 12.5" iron wheel has similar rotational inertia to a 2.5lb 26" bicycle wheel (which is actually a 22" dia metal rim).
Challenges in doing that are getting a new base/treadle system fabricated, because I’m not chopping up an antique.

Ideas I’ve discarded: I considered removing the weight from the upper handwheel and replacing the belt with a chain, but I believe the belt being a slip point might be good for the machine. Nowhere else is there an engineered slip/break point if the needle hits something too hard. I think upgrading to a chain might endanger the machine.

To address the design flaw:

I wonder if you could design a pawl that interacts with the flywheel so that it could only rotate in 1 direction. I would say something friction based so that the flywheel itself doesn’t have to be changed at all.

Have you done a patent search to see whether others have already come up with the improvements you’re trying to develop?

No, that’s a great idea!

I did find out about a brake system that another company used to stop counter rotation- they built a little cage where the large flywheel met the drive belt and set a rubber ball in it. When the machine moved the correct way, the ball just bounced in the cage
When the machine counter rotated, the belt would grab the ball and pull it into the belt and flywheel, essentially throwing a wrench in the gears!

I haven’t really tried to creating one of my mechanical ideas before. I have an art background bit always wanted to learn mechanical/industrial design. I am learning a lot!

There seem to be 3 main design approaches to counter rotation-

If you’re serious about industrial design, you’ll want to learn this software:

As a Makerspace member, you can register for a free one-year license (which so far has been renewed each year by the licensor):

I thought about this a little more and anything like a brake or a pawl will stop it from turning the wrong way but won’t push it in the correct direction. 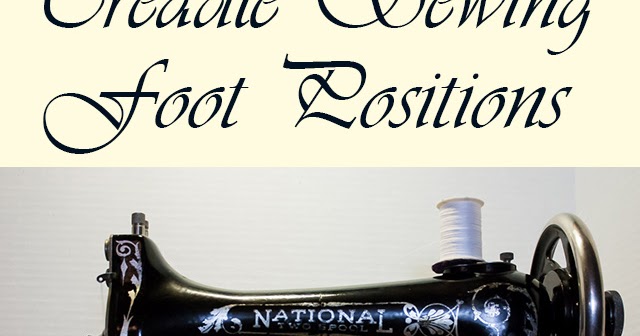 Learning How To Sew on Treadle Sewing Machines

Learn how to position your feet and what drills to do in order to gain or improve treadling sewing skills. No power needed to sew when using a treadle sewing machine.

Apparently one answer is just practice

Any reason you couldn’t just replace one of the flywheel bearings with a sprag clutch? It’s essentially a bearing that only turns in one direction.

Any reason you couldn’t just replace one of the flywheel bearings with a sprag clutch?

I thought this was as great idea!
BUT…

I’m not terribly familiar with these devices, but I do not think there are any actual “bearings”, at least in the treadle/drive mechanism; they rely on light oil and the natural lubricity of cast iron to do their thing… Here’s a pretty nice assembly video, and, except for the “bearing” on the pitman arm crank end, about which I am still unclear, I’m about 85% certain there are not “bearings”, but rather simple “bearing surfaces”.

Yes the normal order of operations is to use your right hand as a starter to turn the upper wheel.
I have practiced that to the point of proficiency, but I would still like to start the machine the correct way with feet only, so both hands can guide the work.

The doughnut that connects the pitman arm to the crank shaft is an actual bearing. Just crawled down there for a pic. Also- I am wanting to build a treadle base from scratch. Not modify my existing base.

I posted here because I was hoping the DMS’s collective mind would know of existing parts I could use to frankenstien it w/o attempting to machine a lot of custom parts.
I know some about cars, some about bikes. I’ve tinkered a bit.
But my level of knowledge there is a vague ‘how it works’ and competency level is ‘parts swapper’ things like radiators, calipers & adjusting/bleeding those systems. Not ‘Gee I’m going to re-wind the alternator wires/ rebuild the transmission’.

I thought about using a drum pedal connected to the crank shaft on the far side of the wheel from the treadle- as an ‘inch forward/starter’ pedal.

I still think that starting the rotation with negative torque is better, but this is a quick design for a brake using a captive rubber wheel in a sliding channel.

When the belt rotates the correct direction, the wheel will roll up the slot, and not interfere with function.
But if the belt rolls backwards, it will pull the wheel down into the rest of the mechanism, and stop it against the rubber on the cross brace. You could replace the flywheel bearing with a one way sprag bearing:

McMaster-Carr is the complete source for your plant with over 595,000 products. 98% of products ordered ship from stock and deliver same or next day.