I put this under Science because beekeeping is a scientific endeavor as much as anything.

I like BeeSource.com (esp. their Build it Yourself Section) as a source of beekeeping hardware designs, but today I saw this Top Bar Hive design which uses CNC routers for the layout. The design is Open Source and includes patterns for varied-thicknesses of plywood (18m,19mm,20mm, and 0.75 inches).

That looks awesome! Maybe we should have a few of us buy wood and get together to put them together? Or one buy a bunch of wood. I have a pickup.

Rightly so, our Science Vice-Chairman, @kobin is a Beekeeper.

We were discussing Beekeeping is our Science meeting last Sunday.

We just had a new member teach a beekeeping class last Sunday. Top bar hives are not so good for getting honey out of the comb (bees will lay larvae and make honeycomb on the same frame).
We were discussing approaching the city of Carrollton to see if they’ll let Makerspace install a beehive in one of the parks or empty lot or something.

Wow that would be awesome if we could have a beehive

Yeah it was just a thought. I figured it’s one of those things where we would have to see if the city/park would even entertain the idea. I’m not sure how they would want to handle keeping people from messing with the hive or keeping a reasonable distance, while also letting us do the upkeep.

Didn’t figure it would hurt to talk to PR and ask?

I know there has been a save the bees push, so why not? Also figured we could put something about DMS on the outside of the hive area.

I know there has been a save the bees push, so why not? Also figured we could put something about DMS on the outside.

This has been discussed in the past before. I believe we have several folks whom are allergic to the point that they carry an epi-pen. Just something that people need to be aware of. The bees don’t bother me though.

I am deathly allergic to bees. As much as I am all for saving the bees/environment, I would prefer that my experiences at DMS not try to kill me anymore then it already does.

Teaching classes to help people learn how to keep Bees, sure go for it.
Keeping bees at the DMS, please no, I have nearly died once due to a sting and would not like to repeat the experience.

That was my main concern, but just figured it could be discussed. I know some people keep them on roofs. Or perhaps if was a bigger park.

DC has a program to where people can keep bees at certain locations. ( I don’t think they’re parks though). Maybe see if Carrollton or a nearby city has something similar.

Definitely not at DMS…

The Glencoe Park District put its two beehives on display during an Aug. 14, 2018 public event. 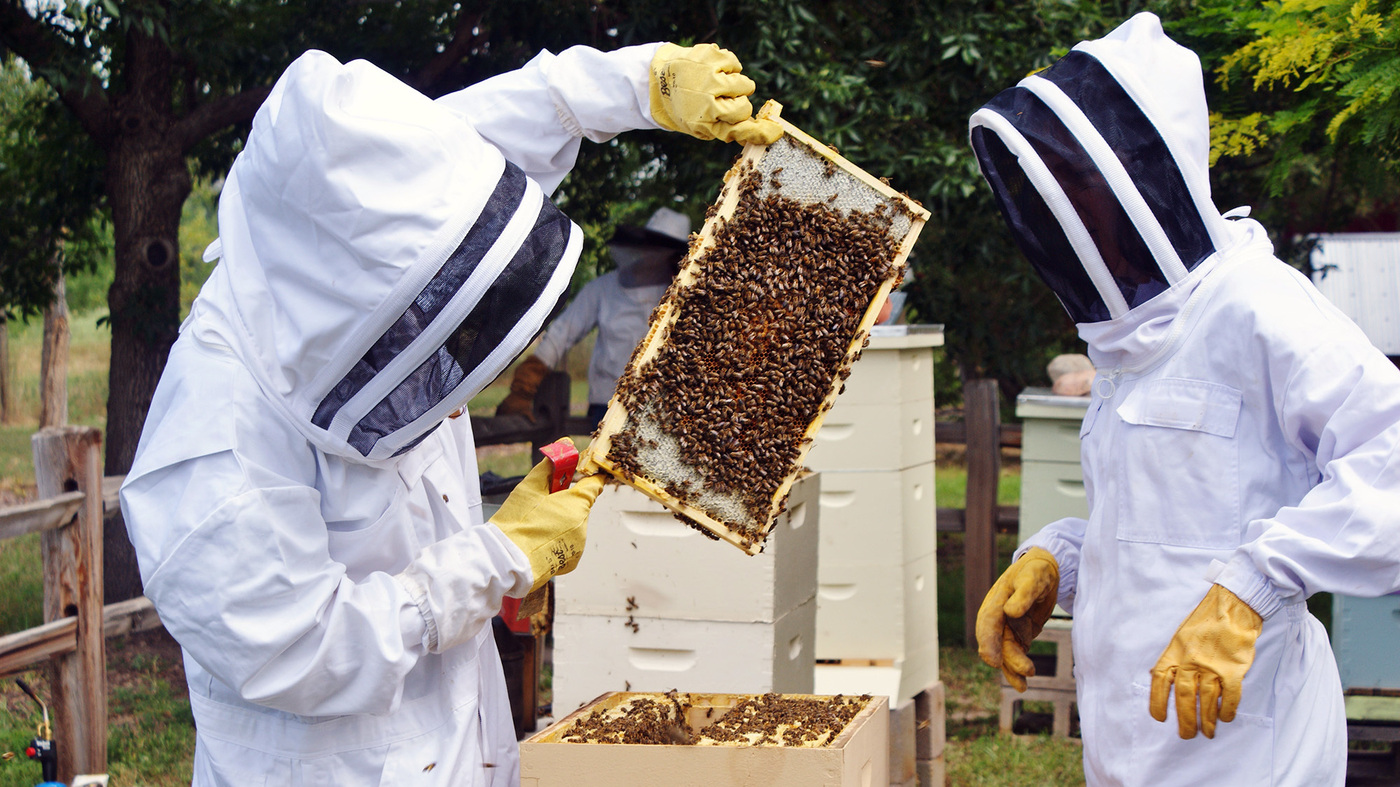 Beekeepers Benefit From The Hive Mind In Community Apiaries

Modeled after community gardens, the sweet setups allow beekeepers to maintain hives in public spaces. Beekeepers harvest not just honey but the collective knowledge of their colleagues.

So its not too far out there of an idea. Safety is important yes.

Recently I saw something on Facebook, and I think it was about a bee fountain, where they could drink? Maybe we could do something like that? It would attract bees, and nurture bees, but without convincing them to live there. It would probably require some maintenance, but without the issues of hive maintenance (or so I guess).

Top bar hives are not so good for getting honey out of the comb (bees will lay larvae and make honeycomb on the same frame).

One can have the same issue with a Langstroth hive: the usual solution is a queen excluder (or several frames already full of capped honey) between the brood box and the honey supers.

One can place a queen excluder as a divider in a Top Bar hive much like one can do so with a Langstroth style hive. The shape is different due to the sloped sides of the top bar hive, but the approach is the same.

Similarly, one can run two-queen hives in a Top Bar hive: a colony on each end, two queen excluders, and a communal honey section in the middle. Until the hives are strong there may be some unused space in the Top Bar hive, so one would need to handle that through either placing the colonies closer together, or by inserting some space-filling boxes to mask off certain areas of the hive until the colonies grow strong enough. This is the TBH’s weakness, though: one cannot add additional supers easily to a TBH. Instead, one must keep up with the honey produced and extract on the bees’ schedule in order to make more room (but too much honey’s a good problem to have).

Re: honey extraction
Top Bar hive owners usually use the scrape, shred, and strain method of honey collection. Not the most efficient, but TBH’s are not really for large scale production. Someone using TBH’s likely also won’t own a cappings knife, radial extractor, honey heating tank, etc. I was never concerned with the quantity of honey I produced: I used Langstroth hives and the scrape and strain method with a strainer made from 2 five gallon pickle buckets and some fine-gauge netting. Made for clear, tasty honey, albeit slowly. I fed the honey-soaked cappings back to the bees rather than trying to separate the remaining honey from the cappings via melting (again, not using a commercial operation’s goals).

I kept multiple hives of bees for over 20 years (gave them up three years ago) and have mentored a few people in getting started in beekeeping. It’s a great hobby.

I recommend that newcomers to the hobby plan to get at least TWO hives to start: that gives you a 2nd hive to compare a hive’s strength, and gives you many disaster recovery options a single hive won’t support (e.g. swapping hive locations to balance worker bee populations, swapping frames to bolster a weak hive, combining hives if a colony loses its queen, et al).

In the DFW metroplex, I also strongly recommend the Collin County Hobby Beekeepers Association: they are a strong group (or were when I was attending), have monthly “bee talks” on where your hives should be, have a wonderful mentoring program for teen beekeepers from non-beekeeping families, etc.

Their 2nd Monday monthly meetings are at 6:30pm at the Collin College Conference Center (Central Park Campus), 2400 Community Ave. in McKinney. The next meeting is in three days: Monday, 10 Feb 2020.

I don’t think bees in an industrial park would be the best choice. Not much blooming vegetation for them to collect nectar.

Kyle, the bee dude who led the class last weekend, stayed firmly that if you start the hobby, you must start with two hives. A lot of his presentation covered the same points @HankCowdog made above.

Hey guys just saw the discussion on the forum! I am working on getting another class together with a field trip where we can go work a few hives. I have apiaries all over DFW but it’s just a little cold and wet right now. I agree bees in industrial park isn’t ideal. But… you can keep them on the roof of buildings etc with some success. About the top bar hive. I run a few for splits and Queen rearing ( I know what queen I’m adding to an existing hive). They usually are good for honeycomb but not production. Either way I will post the presentation for all as soon as i find a place for it. Please I’d love to answer any bee related questions. Also I can’t buy the wood for my langstroth boxes as cheap as I can order it pre cut. Top bar are a different story as they can cost more to build initially but. The bars are cheaper than frames. Cool you found the CNC plans.

Really cool to know there is another beekeeper or former in the group! Yes CCHBA and Trinity valley are great orgs. Actually the class I taught was basically the same ( well with a little more info) as the classes they teach for $$$ exept the practical aka going to a bee yard. I am willing to help newcomers especially those looking to get into beekeeping. Also if you want to help assemble bee boxes. I have about 300 on a pallet in my driveway that need to be put together lol. Anyways great talk on bees. Also there are a few others Texas beekeepers Association is a great resource to find beekeeper clubs in your area.

Is anyone besides Jerry interested in making some? I don’t have CNC training but if the material cost was reasonable I would be happy to pitch in for my share and pick up materials. I would also be happy to help assemble.

Awesome well it looks like we need 4ft by 8ft boards that are probably 3/4in. I am assuming finding measurements in freedom units are easier than trying to convert to mm here. And they can’t be treated with formaldehyde. I’m googling around trying to find some wood sources

Suggest starting with some of these
https://dallasmakerspace.org/wiki/Wood_Suppliers

These seem like I will have to call them… So until a later date.