Do you find yourself wanting to do a little wood working today, but don’t have a project in mind?

Drop by and help cub scouts build a wooden race car. If an 8 yo can do it, so can you:) 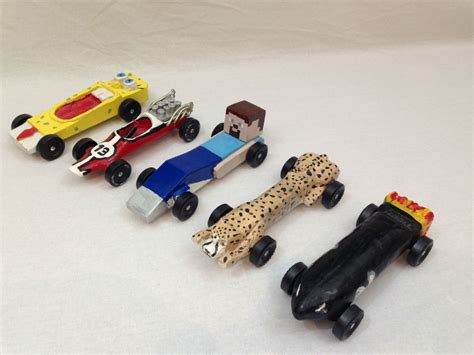 Thanks so much for helping these kids get their cars built without Dads taking over the builds.

I helped the last time this was done at DMS and had a great time working with the Scouts. They are a great group of kids and the whole experience was fun. The most important task we did was to use the bandsaws to cut the scout’s design.

I’m headed out to the space at 1:00PM to help again. I’m very much looking forward to it. Please come and join us.

OMG, thank you for your kind compliments to my pack’s kids.

If anyone has templates for derby cars, we would love to borrow them for a few hours.

Volunteers will meet up at 1PM at the work tables near the entrance of woodshop. The actual event will start at 2PM at North Lobby.

I will bring some templates.

Thanks so much for helping these kids get their cars built without Dads taking over the builds.

My father had a debilitating stroke when I was three years old. I have mostly sad memories of Cub Scouts as it pertains to all of the things fathers and sons typically do together in Scouts, including the Pinewood Derby. The car I made as a child was little more than the original wood block, minimally carved by hand, painted, and with the nails and wheels glued on as best I could do alone. Needless to say, the effort I put into the car as a 6-7 year old, didn’t turn out very well. Came in last place, if memory serves.

Later, as a father, I became a Cub Scout Den Leader, and my twin boys both made cars, with my assistance (which if you research the Pinewood Derby’s 1950’s history, is the whole point of the event…father-son bonding). And hey, I got a scrollsaw out of the endeavor, which, indirectly led to my eventual interest in making, and led me to DMS.

We competed in local Pinewood Derby events, and also raced at the Mid-America Pinewood Derby Nationals in Omaha Nebraska. We learned about how to optimize the center of mass, and how to reduce the coefficient of friction (e.g., Raised front wheel, NOVUS 1-2-3 plastic polish and Brasso for the de-burred nails).

I’m currently in bed with the flu virus, but let me know the next time there’s an event like this. I would be happy to help any Scout who doesn’t have a dad to help them, and guide them on how to build a car they can be proud of.

I’m currently in bed with the flu virus

Damn, hope you get better quick. Had Flu B myself and it sucked!

We all had some great fun making pinewood derby cars today. Thanks to everyone who helped especially @DigitalDoyle and @cwai2007 who helped cut the templates. Thanks to @jbrown885 who provided some great templates and @Julie-Harris who did so much to make the event a success.

Thanks Chuck for bringing in the scouts. I am glad to hear that the scouting program worked out so well for you and your kids.

I hope you get better soon. From the scouting perspective, before this event, it’s very apparent that the winners are parents who have the right tools to make the cars, which was the number one complaint from parents and scouts. This also led to a few families just giving up and submitting their woodblock car as is, because they felt like there’s no point.

This event helps level the playing field and both the parents and scouts are more into it.

Just to echo what @coloneldan said, this was only able succeed with the help of many people. We can’t thank you all enough for taking time out of your day to do this.

Not sure how you promoted this DMS event to your Den (or maybe also to the larger Pack), but I do think that a District-wide communication about DMS, and its potential to help kids and their parents who might not otherwise be able to access Woodshop tools, could be a great way to introduce folks to DMS. Just a thought.

I really like the idea, but if we all are going down this route, we need to be VERY careful about execution.

I am the committee chair, so I promoted this to our pack. We had roughly 30 kids show up and I had a heck of a time trying to make sure they all went home with all 10 fingers.

I imagine Julie, Doyle, and Dan had similar feelings as well, when they weren’t busy cutting wood.

Can you imagine doing this, but with more kids? How iron-clad is that liability waiver that we sign?

No, I think you’re missing my point. I’m just saying that awareness of DMS at the District level may promote interest in eventual DMS membership by Scout parents who do not have access to all the wood-shop tools we have. I am by no means suggesting a mass woodworking event. But if these parents knew about a place like DMS, they may join.

I agree, I misunderstood you.

I think someone at the district level is also a member of maker space, but I don’t recall the name specifically…

I’ll mention maker space to my contact to council.

Sorry I missed the event! I used to love doing Pinewood Derby with my kiddo!

When we raced with our pack, we had a ‘parents outlaw’ category where the parents could go crazy with their own builds. So of course I attached a ducted fan and RC to my car. We do the same thing.

This is my entry. Must go UP HILL