Desperately in need of help with design of single-stage model rocket that must come down in 2 separate parts(capsule w/ eggs inside & engine section). Don’t have any model rocket experience. Help me DMS, you’re my only hope

@Bill is one of a few Dallas Area Rocketry Society (DARS)

Don’t have any model rocket experience.

I am going to ignore my gut instinct to just declare that you have missed your launch window and ask some questions instead.

In a nutshell, the task this year is

The event involves designing and building a model rocket (650 grams or less in weight, 650 millimeters or more in length using NAR-certified model rocket motors totaling 80 N-sec or less of total impulse) that carries a payload of three Grade A Large eggs for a flight duration of 43-46 seconds, and to an altitude of exactly 856 feet (measured by an onboard altimeter), and that then returns the eggs to earth uncracked in a separating “capsule”.

I have a team of 3 people, we have all the parts we should need except an altimeter(I think) and are utilizing a vague idea of a design based on one we came across while scouring the internet. I’d love to be able to simulate it but with 10 days to finish building and launch I believe I’ve deprived myself that luxury.

Wow you can hit a target altitude accurate to one foot?? This is a lot different than the model rockets I used to launch…

You try to get as close as possible to that mark. I imagine very few teams hit it spot-on

We mentored a team from Rockwall-Heath which made numerous test flights and recorded the weather conditions for each one. They were able to adjust for almost everything.

They won the US competition and went on to Europe where they also won. 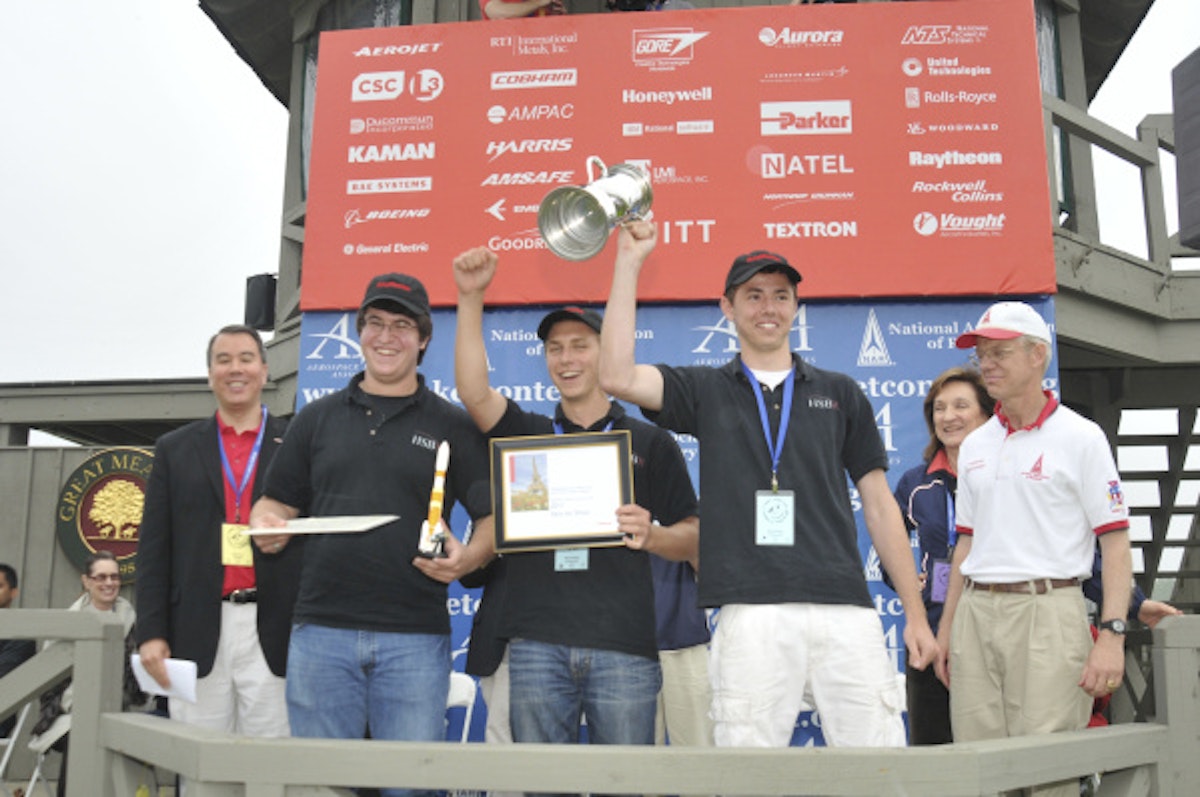 After many tries, team earns top prize in the 2011 Team America Rocketry Challenge and will travel to Paris to compete against British and French teams.

Honestly, at this point I know it’s late and I’d be happy with a rocket that flies up, doesn’t explode, and lands safely in 2 pieces

Give up this year, get head start on next year. You need to be testing at least a month ahead of time.

I’m a former UTA Aero Mavericks member; we did almost this exact project, and we used up several months building these things. Now, we were full time students that prioritized our grades, so I bet you could do it faster than that, but even today I would still want two months to do it at least (with few distracting obligations during those months), or perhaps 200 man-hours. I’m sure more experienced people could knock it out in under 50 man-hours (I never did certify), but still.

Edit: apparently contest rules will limit what we could do anyway.

No part of any of these activities for a rocket used in a qualification flight or at the Finals may be done by any adult, by a company (except by the sale of standard off-the-shelf components available to the general public, but not kits or designs for the event), or by any person not a student on that team.

Anyway, I think this allows me to talk about what we did / used on our project, since saying what we did and how well I thought it worked isn’t telling you what to do.

We used OpenRocket and our altimeters were generally Featherweight Ravens. We put our eggs in soda cans, filled the cans with expanding epoxy foam (in such a way the egg was held in the middle), then cut it back out and used the egg-shaped void, foam filled soda cans as our egg holder. I don’t think the soda cans were that great, but iirc they did work. The lander itself was a little thing that folded out like a flower when the hot wire (controlled by the altimeter) cut the line and let the spring open it; it was all on a parachute that I believe detached from the main lander at the same time the flower mechanism was cut loose (on the ground). We were DQ’d since the line failed to cut, and since the rules required us to land “upright”, and that was the un-tripped flower mechanism’s job, that was that.

We spent a few long nights experimenting with the hot wire mechanic, a good month deciding to use the flower design, maybe another month assembling (the “petals” were carbon sandwich, and the springs that opened them were not stiff enough and had to be upgraded to a set that was a bear to install), and we never test flew until about a day before the competition proper. I wasn’t involved with the rocket itself; I’d budget a month for that.

I will say that a different competition vehicle of ours had a little too much black powder eject a vehicle once and murder it, and each time we calibrated thereafter I always insisted on dialing the amount down as far as possible. The Raven maxed at 90gs, and that little “super” charge pegged it out (and unplugged the battery and unseated the electronics and jammed some gears).

Again, we probably weren’t very time efficient ourselves due to the whole college thing, and I think a dedicated team of 3-5 that had a decent idea of where to start could do all of this in 2 weeks to a month if they didn’t have those other obligations and they skipped all flight testing. But we were a team of ~15, building 3 different vehicles (2 of which had “landers”), had 6-8 months (starting August / beginning of fall semester), started with several very experienced members, and were very homework-burdened throughout. And we also ran out of time for flight tests; that always happened, and every time it did we always felt like that would have been the thing to make us way better.

I really think focusing on leveling up your rocketry skill ASAP for next year is going to be the best you can do.

Thank you very much. I’ll be sure to implement your tips in the future, and start much earlier. Sadly, I’m sure you’re right we don’t have time for that this year. This whole competition was dumped on my lap just recently, is there any way I could build a rocket that at least flies in the time given? I have all the parts from an apogee tarc kit.

is there any way I could build a rocket that at least flies in the time given?

Is there anyone else on your team with model rocketry experience?

Making a safe flight and recovering the eggs unbroken is not difficult.

Nope on the others with experience, unfortunately. But I’d be happy with a safe flight and unbroken eggs