So one thing I notice a lot is the guard on the jointer loosened to where it won’t spring back leaving the cutter head is exposed, now on of the accounts I follow one social media is Perkins brothers builders, their dad was a carpenter they’ve been carpenters building houses their whole lives so very few people at dms can say they have more experience around tools! and Jamie was especially skilled, but unfortunately while working, he had his carbide cutter head jointer similar size to ours with the guard loosened leaving the cutter exposed and was in a very tragic accident and not to get to graphic lost almost all digits but his thumb! So I know the guard can be a pain in the ass sometime and whenever youre running a lot of stuff through it, think ehh why not i know what im doing let me just get this thing out of the way so I can save 5 mins of my time! But there should never be a reason that that guard doesn’t spring back and spring back fast! Period! So be safe and don’t think saving those few minutes is worth ever deeming that guard as anything but just as necessary for that machine to run as the power cord that plugs it in!!

I don’t understand why folks think it’s ok to use an angle grinder without the shield installed.

Safety equipment is there for a reason. While blacksmithng in the class at Brookhaven we are required to wear safety glasses and a face shield.
In addition I have safety capable eye glasses. The sparks from an angle grinder can be very dangerous to your eyes as well as one of the cut off disks seperating like the photo you showed. I even caught a T-shirt on fire because I didn’t direct the sparks away from my shirt.

Simple and very useful tool but it can be very dangerous so be very careful and wear the proper safety equipment like Mike suggests.

You can never have too many safety reminders. Saving someone an eye or appendage is always an appropriate goal.

@Team_Woodshop is this a part that can be ordered to install at the next maintenance day?

The most likely scenario is members loosening the guard spring, or not tightening it back when it’s discovered. The whole guard concept seems to be inconvenient for some. It is usually with those who who have very little real world experience with the tool, and almost zero respect for what can happen, but they do seem to have a whole lot of virtual experience via youtube. Personally I am hyper vigilant when using this tool since redos aren’t available. I am almost of the opinion that this should be a bannable offense on the jointer.

No the feature is in place and functional, but it has the ability to be “overridden” and can be loosened manually, the tension on the spring that snaps the guard in place is should snap back fast and make a very audible clink when it hits the fence so as quickly as the wood is past the cutter head it snaps back covering the good 2-3”x12” exposed area of the cutter head! Now I don’t know if this is a result of user action or If the set screw just isn’t holding as tight a it used to from wear, and over time it just slowly becomes free swinging But none the less the safety feature is installed and when tensioned works as designed! But just heard about Jamie’s story and have been a fan of Perkins brothers for a while! But the story does have a happy ending Jamie is now back at it just as before with the help of bio mechanical prosthetic and still builds Some really nice houses

I agree people use the term cut to often, “I got cut by the blade” these machine don’t cut they remove, a dado blade or a jointer isn’t going to cut you it’s going to remove! So it’s something that when proper focus and attention are given can be used safely but when someone’s using it and not giving the use and safety of the tool their full concentration it can be not good!

The set screw is not functional; it is cross-threaded and unmovable. I think the bolt might need to be drilled out and the hole possibly re-tapped.

With this being the case, and the tool being so dangerous, should it not be locked out?

I have tightened the guard many times, so it wasn’t implausible to me that it was just loose. I can visit tomorrow during the day and attempt to address the problem.

Maybe we should consider demoing this tool to new members with a clean beef bone. New addition to wood shop basics, show how each tool can process a bones. If the bone is clean and seasoned, there shouldn’t be any clean up required, as it will just be collected like any other dust… If anyone isn’t impressed watching these demos then maybe they should be issued a refund for their membership.

WARNING: If you are squeamish or are sensitive to intense situations DO NOT WATCH. This is the video of my injury. How did it happen? Hurrying in the shop and not following my own safety rule cause me to have a catastrophic incident. Here’s the video and my story. 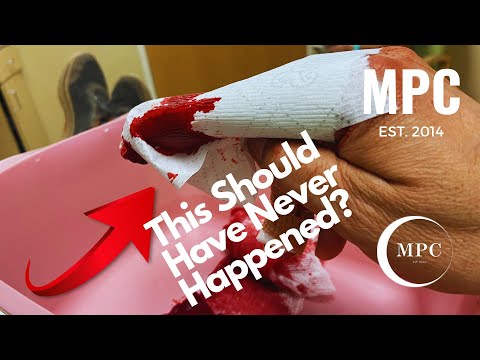 Seriously! If you’ve ever shopped for garbage disposals, seriously a rating level or test measure is wether it can process chicken bones or not to demonstrate the power of it! I saw someone who was holding the guard open a few weeks ago, i explained proper use, when the guard spring is set properly it swings as designed and there is no reason to loosen the spring or manually hold the guard open. Maybe we need a security set screw so it is not so easy to bypass. Also post some photos of injuries at the machine, some people rarely use Talk

This Sunday at church a friend of mine, who is in his late sixties, got up in front of the class and showed his left hand. He only had his ring finger, little finger and thumb remaining. Last weekend he had an incident in his home shop with his tablesaw. He had a situation where he should have been using a push stick and wasn’t. The accident cut off his first two fingers. Ironically, he said his father had exactly the same thing happen to him. He’s a very experienced wood worker and he was just going to do a quick cuttoff job. He got in a hurrry and lost two fingers. Never get in a hurry and never disable the safety mechanisms on woodworking equipment. They are there for a reason.

Incidentally, the same week another friend of mine, who’s in his 70s, was moving his lawn and his mower got stuck so he absentmindely reached under it to move it. The blade was still spinning and it took the first knuckle of his forefinger and stripped all of the skin from the first two fingers. A long visit in the ER lots of narcotics and pain later and he’s recovering, but his first knuckle is gone.

Both men are mature and knowledgeable about safety provedures. They just got careless. Now they will both be maimed for the remainder of their lives.

I recently had an incident on a bandsaw when I was cutting a log the incorrect way. Even though I knew not to what I did, I didn’t think anything would happen to me. It cost me a good bandsaw blade and a pair of bandsaw wherel tires:. https://www.amazon.com/Pack-Urethane-Band-Saw-Tires/dp/B07YMWWMJ7
Thankfully, the only damage to me was a bad scrape on my hands from the wood and not the blade.
(I was using the proper safety equipment and using a push stick, but still created a dangerous situation)

Accidents can and do happen to almost ANYONE. While working at Rockler I saw many a patron with fingers missing and one guy who had lost an eye. Most related to 1) having removed the safety equipment from their tools or 2) getting in a hurry.

SAFETY IS ESSENTIAL PEOPLE… Be careful.

Complacency kills. Always be aware of your hazards. Yes I have a beard, I’m very very conscious of how close I get to rotating equipment.

It seems most “experienced” woodworkers have a missing digit.

The ones that had to learn the safety rules the hard way!

I still remember, several years ago, just after I had joined and gotten cleared to use the woodshop, I saw a guy using the jointer. With the heel of his hand PRESSING ONTO THE PLATE! That was the only time I have ever shut off a machine when someone else was using it.