Stumpy Nubs just posted what I think is a great first aid video specific to wood workers. It mainly covers having a first aid kit, but details why the tools in such a kit might be useful to woodworking specific injury types. I’m not sure what the required reading for Woodworking 101 is but I thought I’d share this as I found it to be helpful and eye-opening, especially the part about finger amputations and how to recover them in that worst case event. 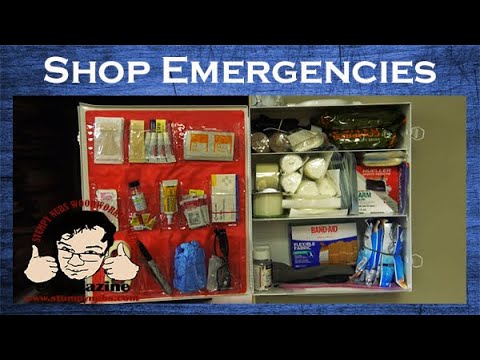 @Chetan_Raj
As it’s related to the topic I went a while back to a live similar discussion with woodworkers and then met with a ER doctor to discuss what supplies DMS needed on hand.

The results of those discussions are in a trauma bag under the first aid kit that should have a safety tie so that everything is there if needed.

The supplies in that bag are top notch and based on medical guidance specifically for catastrophic injuries.

I never got it established but it’s still my hope someone can continue with doing a woodworker specific first aid course for traumatic injuries until medical services arrive.

The results of those discussions are in a trauma bag under the first aid kit that should have a safety tie so that everything is there if needed.

The trauma bag is under the first aid kit on a column between Automotive and the Woodshop Annex, facing the rear entrance. I don’t see a tourniquet though in the post you link to from 2018. Is there one in the bag now?

Thanks for posting the location map! I couldn’t picture in my head where it was located.

There is not a tourniquet primarily based on that the guidance I was given.

Based on the fact that we are in the city and EMT services are readily available a misplaced tourniquet can do severe damage if not placed appropriately.

There is enough quickclot and Bandages in that bag to slow most bleeding in the time it takes EMT services to arrive.

If we were further away from medical services our risk profile would be different.

I really like the idea of some “required reading” for passing any online WSB/101, or a pre-req for taking in-person WSB. It could easily include this emergency kit information, reviewing major tool manuals, and Felder cleaning guidelines. And, obviously, DMS/Workshop/Woodshop rules, e.g. safety glasses required.

Also might be worth covering the contents of the kit and how to use what’s in it. Like with the tourniquets, other medical devices/first aid items can do more harm than good if you do it wrong. It would also be nice to include a description of what you may see /feel /have to deal with (if you’re helping someone else) instead of going into everything blind. For example:

I know they all (or should be) Kaolin-based but the original QuikClot used zeolite and that burned like a mother when it hit the wound. I know people that stopped using it or stopped applying it to someone because they might have been yelling before, but they sure as hell started yelling louder once the burning kicked in. One of those “necessary evil” things when faced with heavy bleeding.

Or… not you know just trying to add my .02 in on a subject I’ve dealt with on a personal level

the contents of the kit

Hm. I did a quick walk back through the comments I could find about what’s in the Trauma bags, and was NOT able to find a list of contents. This pic is helpful 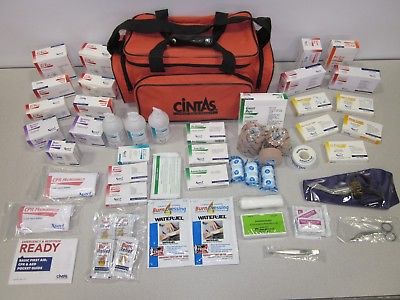 but I agree a list would be very nice to have/post/talk about… @Robert_Davidson any shot you have such a list?

It would probably be best to just get some more seals and open it up to take photos and see if there needs to be anything replaced as it’s been a few years since it was built.

Also … does anything have a specific shelf life?

Honestly I don’t believe anything there is that critical if it did expire but I imagine just like hospitals if it was to be used we don’t want it to be past the expiration date.

Cintas does offer a subscription model where they come out and replace expired items on a regular basis. The Makerspace might want to look into that for continuity sake. Ie what if the responsible person gets hit by a bus kind of thing. Woundseal expires after 2 1/2 years for example.

We have had that in the past, and I’m still working on determining if we still do. Unfortunately, Cintas is a “typical” conglomerate, with splintered divisions and services, so the same “Cintas” that does first aid-type restockings is not the same “Cintas” that stocks janitorial supplies, and we’ve been…lax…on record keeping in some recent years…
But thank you for brining that up; we might want to have such a service, Cintas or other.

Thanks for everything you do for the Makerspace.

@Robert_Davidson in looking at that picture (if it’s representative), the watergel burn bandages have expiration dates, as will any other gels or creams in the packaging.

I also see 3 bottles of what is undoubtedly eye flush, and those are buffered and will have expiration dates, and will need to be replaced as well.

Additionally, any QuikClot will have expiration dates on it, but the powder doesn’t expire, the concern is that if the seal goes bad, it’ll get air/water in it and harder and no longer be any good. QuikClot bandages are the same way.

If you can tell me where to find the seals, I’d be happy to do an inventory, look for things that are expired, and come up with a list of things that are missing. There is a comment up-thread about tournaquets - and while I agree that they are dangerous, in the event of an incident where arteries are damaged, they are less dangerous than the repercussions of not using them.

I’m interested in the idea of developing a first aid class specifically for woodworkers - this would be fairly trivial, as it’s really just adapting a good existing first aid class to the specifics of the dangers of what you might encounter in the woodshop. AKA, stealing the Red Cross’s basic workplace first aid class and adapting it and putting it into moodle. I’ve never worked with the moodle interface before, but I envision a powerpoint with voiceover, and a couple of videos from youtube on correct tourniquet use (depending on which model of tourniquet we’d buy - we definitely want one that can be applied by the user without need for a 3rd party to help. Either the SOF-T or the CAT.

I’m not longer an official Red Cross or AHA or EMT instructor, but first aid hasn’t really changed in the last 20 years - it’s still A-B-C and prepping for transport.

Let me know what you think.

On another note, Does anyone know if our AED is within its test dates?

I haven’t checked, but the good news with (almost all) AEDs is that when they self-detect issues, they make an unholy racket of beeping and whining until they get fixed.