Given possibility the Coronavirus situation is over blown about corona virus. What can we as makerspace people do to educate ourselves and the populous. I would like to get back to have good commerce and building the things people like. So a good standard of public health levels should be sought(ie information). Can we agree on the CDC analysis of issue? Not to repeat the initial finds but communicate the results that are consistent for at least 4 to 5 days? (other words not repeating fear and opinion.) Once we do have good information what is a way of communicating this information? Are there experiments that are reproducible that will show the virus to be of no threat? etc.

Well, we as DMS have 2 topics here on Talk already that are addressing the concerns, and how we are dealing with them.

For me, this doesn’t particularly sound different from flu season. Wash your hands. Try not to sneeze on people or be sneezed on. Be cautious but not crazy.

ok when i came home this friday i saw a family dropping supplies from their apartment like two ply then leaving in their car. I come home on friday at 4pm and traffic is gone. My topic is more of what is the standard. Dryad2b if you don’t care then don’t post. I am just looking for info… No one likes the subject. of course no one like colonoscopies.

ok when i came home this friday i saw a family dropping supplies from their apartment like two ply then leaving in their car.

yeah I saw someone checking out today with like 30 packs of toilet paper. I thought - either the panic is really setting in or he shouldn’t have had that extra bowl of chili last night.

But the streets are particularly less busy.

Just making the point that DMS already has 2 topics outlining some reliable information, and how we are coping with it.

And, I’m not overly concerned with panic-mongering.

I know we have to be popular. I know we have to have memberships for dues… to keep the organization going. but a rational healthy view not suppression of others freedom of speech via the internet is necessary. At this point we could spread disease via human contact and it is nice to talk to other people that build solutions. I know you guys flag speech you guys don’t like. but during this time of disease. don’t do this…
supply and demand is how capitalism works… even in socialism… there is capital exchange for need and desires. if a threat is real it creates a real need. yes we should be civil in communicating. but that is an ideal not a law.

Solution: Go to the CDC and WHO websites and read up. TALK is just ‘Talk’.

What are you on about? Im just seeing a bunch of meaningless nothing…

We have a lot of meme posters regarding washing your hands and those stay up. Kinda of healthy to poke fun and also understand the position DMS is in. If you are seriously concerned stay home for awhile.

Are there experiments that are reproducible that will show the virus to be of no threat?

You are irresponsibly implying that the virus is “no threat.” Maybe it’s “no threat” to healthy children and young adults, but they can transmit it to parents and particularly grandparents who are quite vulnerable. Many people have already died from this, and a whole lot more will die from it, so calling this “overblown” and “no threat” is [redacted for civility].

yeah I saw someone checking out today with like 30 packs of toilet paper.

I have to agree that this is wacky. These people fear that society will be so broken-down that store shelves will be empty of necessities; and, rather than spend their toilet paper money on food to eat, their priority is a clean anus. 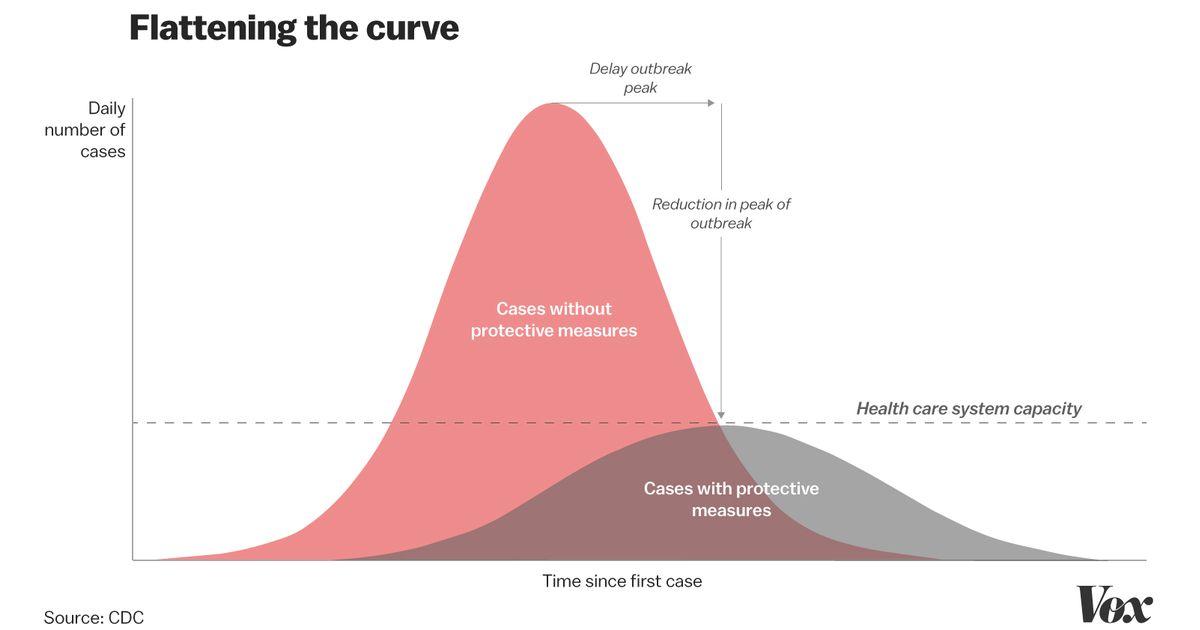 How canceled events and self-quarantines save lives, in one chart

This is how we all help slow the spread of coronavirus.

You can call it overblown. I’ll call it logical and scientifically informed. Please stop spreading ignorant bullshit like this. It’s good for nobody and only serves to worsen things for everyone.

It’s been my observation that the healthcare system in the United States is optimized around the following:

Whatever you can do to avoid getting sick - especially during an emerging pandemic - is strongly advised. Flattening the curve as has been mentioned above as well as maintaining vigilance after the passage of the initial peak.

We also live in unusual times - nearly the entire industrial world has transitioned to JIT (Just-In-Time) logistics which results in tremendous operational savings for industry by not tying up resources in inventory but results in minimal buffer against sudden demand shocks. The situation with toilet paper, paper towels, hand sanitizer, rubbing alocohol, etc is similar to how stocks of bottled water, break, and milk get awfully thin every time there’s the threat of snow - there’s simply not enough stock in stores nor distribution centers to absorb the demand change. Toilet paper likely isn’t being consumed at a greater rate - people will reach their personal saturation point stockpiling it in their domiciles - and the supply side will catch up without significantly ramping up production (with resulting inventory pileups that businesses wish to avoid!). The other items may see increased demand and thus additional supply - if the producers feel like the additional costs will pay off.

But the real danger in JIT is the knock-on effects. What if critical deliveries of finished goods can’t happen because lean operations are missing too many employees to hit production schedules? Or if time-sensitive deliveries are missed and plans that demand on JIT production fail? The idea that society is 3 meals from disorder may not be proven, but I’m not sure we want to press the point.

perhaps i am irresponsible. but i am looking to gauge the threats to public safety… Some way that is minimal and objective. This view maybe false or limited. I am looking gauge the public biological threat through a solid basis on enumerated (i.e numbered, discrete number) dimensions( metrics, scale of 1 to N) that can atomically be proven to effect the biological health of the individual and public at large. I hear the scary emanate danger and find the descriptors to not define the problem at hand. I am not looking to assume the threat level but i find people have already drawn their own conclusion and that a debate would help people gain more understanding by have more or less fear on the basis of actual science. To David_A_Tucker I hope my words will show you the respect that was not previously communicated correctly.

perhaps i am irresponsible.

See, we can agree on some things. I will agree that your irresponsibility is well intentioned.

Now please do the responsible thing and delete your original post or edit it down to nothing.

yeah I saw someone checking out today with like 30 packs of toilet paper. I thought - either the panic is really setting in or he shouldn’t have had that extra bowl of chili last night.

An admission to being a big ass?

I have to agree that this is wacky . These people fear that society will be so broken-down that store shelves will be empty of necessities; and, rather than spend their toilet paper money on food to eat, their priority is a clean anus.

Last I checked, my shower still worked. I have plenty of toilet paper (Costco, early February) but TP isn’t the only way to get things done if it comes down to it.

Most of the second world has used nothing but water since the beginning of history.

Not a bad place to start if you want a bit of background that is based on real experience and actual science:

The disease expert who warned us

Peter Bergen interviews Michael Osterholm, who says there's very little vacant capacity in the health care system to fully deal with the effects of the coronavirus.

Also, a big difference between COVID-19 and “regular flu” is that this stuff can be spread by exposed persons who have not developed any illness symptoms plus (as David mentioned) it hits elderly and persons with compromised health especially hard. It’s basically a new variety in a mobile world filled with persons who have no immunity. Fortunately, immunity seems to develop based on current observations that survivors don’t reinfect. Hopefully that continues … but it’s still kinda early days. Some countries (England as an example) are choosing to not encourage isolation in a bet that once enough people catch it and recover, there will be something akin to a herd immunity. It will be interesting to watch how that roll of the dice works out.

I’m not an epidemiologist but that approach, herd immunity, doesn’t seem entirely unreasonable if proper protections are in place for the vulnerable AND everyone is on board. Unfortunately, this thing is also randomly killing young people with no underlying conditions.

Based on what’s coming out of Italy I’m precisely the demographic at risk: ~50 with underlying heart condition. People like me are being triaged into hallways to slowly suffocate to death while they prioritize ventilators for younger patients.

Matt, just another factoid supporting the concept that getting old is no fun! And I’m a couple of decades in front of you, too.