One of the inadequacies on my preparedness plan highlighted by this event is my ability to boil water when needed without electricity. My household did not suffer this time around, but honestly, if I could have used a tank of propane instead of electric just to contribute to lower overall demand, I would have. I tried, actually, only to discover several problems. One of them is the ne’er-used allegedly 35,000BTU side burner on my grill, doesn’t boil water in 6F temps pretty much ever. Not by the <5qt pot, anyway. Maybe bigger pan would have worked better; it’s a pretty wide bottom flame. But in the end, I was left with lukewarm water, uncooked veggies, and much less propane in my bottle. So what would you choose to keep in the box in the garage most of its life, to break out on such occasions for light cooking/water boiling in sub-freezing (though hardly frigid) temps?
Articles like this one dazzle neophytes like me with 200,000 BTU flamethrowers. I’m pretty sure that’s overkill… 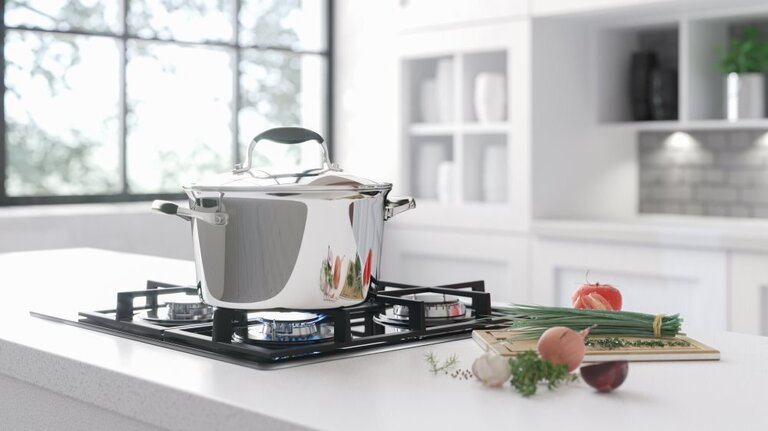 In this ultimate buying guide, you will find the Best Gas Cooker that worth for your money.

and much less propane in my bottle.

You know propane bottles don’t output much when it’s cold right? It’s a liquid that gasifies as a function of temperature. Your burner may be amazing if you give it enough propane.

It’s a liquid that gasifies as a function of temperature.

When she would visit, my grandmother would always tuck me in at night and always made a point to remind me, in her grandmotherly way, something that I’ve always held close to my heart and never forgotten as I went through life: PV = nRT.

Here’s a link to the vapor pressure of propane at various temperatures. Looks like you could’ve been working with about half the pressure than you might be used to from the tank last week.

A quick search says the common tricks for permanent outdoor tanks are insulating them or painting them black for the solar heating. However you do it, more pressure would give you more power at the burner.

Something to keep in mind - basic physics.
Burner = finite heat source
Pot + 6* + wind = infinite heat sink
Camp stoves designed for winter use have wind shields.
And pots have lids.
It’s doable - all about managing where the heat goes/stays.

But, back to the matter at hand, I’d look into a “Dual-fuel” camp stove that supports gasoline. You’re going to have plenty of that on hand during most emergencies even if you have to siphon some from somewhere and it doesn’t have quite the problem with cold that propane/butane etc do.

I don’t personally own one, but I’ve heard good things about this one:

It could be worse. I saw someone on FB insisting they needed to know how to get an outdoor Butane tank to prepare for any future events. Hello zero pressure when around or below freezing.

It’s a liquid that gasifies as a function of temperature.

However, with a boiling point of roughly 7x lower than the temperatures we saw near my house (at about 6F) I doubt this is going to be substantial. There should still be copious, roiling-boil vapor with a perceptible amount of liquid propane in a tank at 6F. Anecdotal evidence suggest this as well. The web is filled with stories of using propane heat at and well below 0F. Millions of Americans have a propane tank in their yard they use all winter long to heat their homes, cook their food, and other ways we exploit the readiness of carbon to combine with oxygen. For most of my childhood, I was one of them. My family was more than 1 of them. I think. It might have been butane. The trucks look about the same, so I cannot be sure. But I can be sure that down to any temperature we saw in rural north Texas (at or slightly below freezing with roughly annual regularity, but never for substantial periods of time), whichever gas was in that tank never failed to light our stove, our water heater, or the super-fun-time open-flame ceramic heaters throughout.

Your burner may be amazing if you give it enough propane.

You might be right; I’ll test again when it’s warmer. However, it is my impression that “most barbeque side burners are not very useful”. Mostly gathered from others, since I don’t use them much.

Differing opinion, my own: when I had no kitchen stove ~8 years ago during remodel, we boiled water a-plenty on the sideburner of the grill I had then, but it never really made it to freezing on most mornings.

Looks like you could’ve been working with about half the pressure than you might be used to from the tank last week.

Except, if I’m not mistaken, and I very well could be, the regulator drops whatever is in the tank down to 8-10 psi at the very top of the scale (some sources say as low as 1/3psi!). At 0F I should still have plenty of vapor pressure. Actually, at anything above, very roughly, based on that graph, say -30F…

Thank you. These are both specialized liquid-fuel offerings, right? Those I looked at look nifty, and would probably work, but aren’t propane powered, necessitating storing another fuel, etc. Which isn’t to say they’re completely out of the running for my attention, just not what I think I’m looking for here. Thank you.

Excellent points. Thank you. I can’t say the idea doesn’t intrigue me, though it’d be a bit weird to cook food over gasoline…

utdoor Butane tank to prepare for any future events. Hello zero pressure when around or below freezing.

Thank you. I’d never looked into the differences between propane and butane before. The trucks that deliver them look the same based on my online search this AM. Now I’m wondering which I see so frequently from e.g. Ferrelgas. I’m certain they’re delivering propane to residential tanks, but now you’ve got me wondering. I didn’t realize butane has such a higher boiling point. What a difference a couple atoms make!

Except, if I’m not mistaken, and I very well could be, the regulator drops whatever is in the tank down to 8-10 psi at the very top of the scale (some sources say as low as 1/3psi!). At 0F I should still have plenty of vapor pressure. Actually, at anything above, very roughly, based on that graph, say -30F…

You are correct. The regulators do take the gas to 8-10”wc which would be close to 1/3 of a psi. 1 psi is about 27.72” water column. Not sure how well the regulators would vary under those conditions. I would be curious if the outlet pressure drops. I have a way to measure it but no longer have a gas grill to check it.

One of them is the ne’er-used allegedly 35,000BTU side burner on my grill, doesn’t boil water in 6F temps pretty much ever.

Does it boil water in this week’s much more temperate temps?

Odds are pretty good that since you never use that burner, spiders or other critters may have clogged the Venturi tubes, interfering with the air mix. The burner holes might also be rusted and/or clogged.

I suspect the burner, not the fuel.

Out here in Colorado we had lows of -22 earlier this month. I used a 20 lb (BBQ grill-sized) propane bottle stored outside my garage to intermittently run a job site 65K BTU heater inside the garage to keep it above freezing.

The propane tank worked at that temp, even though it was so cold that I had to pour hot water over the tank connector to warm it up enough to allow the o-ring to seat properly.

When I’ve done Dutch oven cooking outdoors in windy winter conditions, the wind can strip the heat from the charcoal and the pot, slowing cooking. Putting a windscreen around the pot helped immensely. Mine is made from a 10 foot section of 10” tall aluminum roof flashing, held to itself in a ring with a binder clip. It helps a lot.

I didn’t realize butane has such a higher boiling point. What a difference a couple atoms make!

The specialized canisters in the jet boils etc are just packaged isobutane. Wana say orange is the color marking for the fuel.

I use something like this on my kitchen counter…

With a high heat output of 8,000 BTUs, this portable butane range is perfect for off-site cooking applications where electricity may not be readily available. It features a manual control knob to increase or decrease the flame, giving it an...

The one I have is rated at 10,0000 BTU… takes up little room to store, the fuel is slightly pricey, but who cares?

My experience from Boy Scout Camping with my son’s troop is that at or near zero, 20 LB propane doesn’t do very well. Putting a tank in liquid water will help vapor pressure. I used to use a near pocket sized White Gas stove to boot strap the camp in the morning; heat water and pour it over a 20 gallon tank. Large tanks, like the ones in the back yard, have a larger liquid surface area to facilitate vapor production. Problem is VOLUME, not so much pressure!

if you want something that can also support your Denali expedition, This MSR stove is what a lot of winter backpackers use, liquid feed is more reliable when you’re boiling snow.

The wife and I have had good luck with a single burner butane stove with a propane adapter and an 11 lb tank on our teardrop trailer, down to about 20 degrees. You absolutely have to use a windscreen though.

butane stove with a propane adapter

It’s this guy, with one of these hoses. Honestly if I was doing it again though I’d probably get one with an integrated windscreen.

so no actual burner parts needed changed out to use the other fuel, like Natural Gas conversions on ovens?
Cool!

Yeah, no change to the actual burner. You can actually even run butane camping stoves on propane with a tank adapter, which people do if they’re travelling somewhere the canisters aren’t available. I’m sure performance isn’t quite the same but it does work.